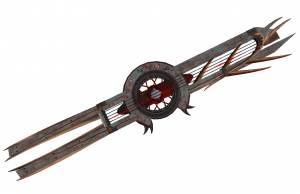 The MetaHarp is meant to be a token of group membership in “MetaHarper’s Cabal” as well as a fun gadget and fascinating conversation piece.

It comes from an idea I had long before joining SL, of using a futuristic musical instrument as a symbol of art and technology expressed together as something more than the sum of either part.

When I was contemplating creating an avatar to explore SL, I asked a friend:

“So, could I make something like a masterwork lute with fiber optic wires on it that had little motes of light swirling around, and could radiate out waves of energy?”

To my astonishment the answer was:

“Yes, if you wanted to commit some time to creating the art and scripted logic.”

So I joined SL and created an avatar. Before I could try and create a MetaHarp however, I was distracted by clothes, animations, people, builds, and all the other sorts of imaginative things. One of the things I found was Perefim Cao’s ecclectic [OMFG] collection of wasteland clothing, accessories, armor, and weapons. One of his items was a “Grimm Harpbade” and was something close to what I had originally envisioned. I acquired one immediately and wore it for almost a year, and Perefim and I became regular conversationalists.

Eventually I wanted to add scripted features to the MetaHarp and share it with others. Naturally I thought of Perefim Cao and asked if he’d be interested in creating a version with me that would be full-perm, able to be copied, extended, and shared with friends. He was excited to start but left SL for personal reasons soon afterward.

This eventually lead to an effort to rebuild a MetaHarp from scratch, loosely resembling Perefim’s work in honor of his accomplishments and of how much he inspired us. Tozh Taurog, Vergil Hellershanks and myself undertook this effort, and we were so successful that we ended up with multiple unique and interesting designs.

While we were deciding whether to try and distill a single version, or keep a selection of different possible MetaHarps, Vicki Brandenburg added yet another excellent design. This confirmed to us that there shall be no singular MetaHarp, but a selection of ones customized as the wearer prefers.

The MetaHarp today is distributed as an item that can be customized by group members, and also as a series of scripts that can be added to an existing or wholly original design. I hope it inspires you to pursue creativity and imagination in all its wonderful forms.