You are here: Home / Archives for MetaHarpers

Laaaaag! It’s everywhere, and we hate it. This mini article will provide some tips to avoiding the effects of sim lag in your show or production, specifically when using movers. By following these tips you have the ninja skills necessary to stop lag from impacting your show’s scripted movement.

For MST movers there are two specific types of lag that cause the most trouble.

2.0 Reduce Back-To-Back SAY, SHOUT, or WHISPER Commands in your Eventlist

If you are operating in a region with significant script-lag, Try to avoid sending more than two chat (say, shout, whisper) messages out on any channel at the same exact split-second of time. Examples:

The eventlist above will try to do 3 different things at the exact same time. It will work well on a unlagged sim but if there is script lag, it may not work well. Set up your choreography so that commands can be spaced out further apart in time. Suggestion: 0.5 seconds apart. The following will behave more consistently in script-lagged regions:

3.0 Use groups instead of running each mover individually.

If your choreography calls for multiple movers to act at once, don’t send out the moveplay or moveto commands to each mover individually. For example, the following won’t work well in script-lagged regions:

4.0 Use the “moveto” style of moving when movements need tight synchronization.

There’s more information on this in the mover web documentation, but the short story is that the “moveto” method will help you avoid region FPS lag, because you can start movement at precise timed intervals instead of allowing it to drive with the sim’s FPS.

The downside to moveto is that if you have multiple movers active at the same time, you need to design ways to command them as a group to reduce overall chat messages, such as described in section 3.0 above.

5.0 When using the “moveto” mover style, Try to design “Catch up space” into your performance.

When facing both kinds of mover lag– script lag and full-sim FPS lag, you can mitigate their effects by building in movement pauses into your performance to allow the region to “catch up” with script and frame processing, if it has fallen behind.

What does this mean? You should not plan to keep a mover in constant motion for a long period of time, but instead design in places where it can rest. Below is an example of a movement sequence with no rests:

Instead it would make the performance more lag-resistant if the mover stopped for a bit, before proceeding to the next waypoint with moveto. For example:

In the above example the third line starts the movement to waypoint3, three seconds after the mover has arrived at waypoint2 instead of right away.

Note: This only applies to “moveto” style mover commands, if you use “MOVEPLAY” and wait time, it will not count as ‘catch up space’.

6.0 When using chat commands, try to use different and unpopular channels.

7.0 When using chat commands, use say, whisper, shout appropriately to the distance you need.

Use just what you need and this will reduce the amount of work the region needs to do to process your message.

That’s all for now, look for more tips later!

I’m going to start putting new, not-completely-tested features into an MST Beta release. This will let more people try it out and give feedback, without causing too much disruption to people depending on the reliability of the existing MST releases.

If you’re interested in trying out the new features, the SL Marketplace has a new, inexpensive option for you! https://marketplace.secondlife.com/p/MetaHarper-Show-Tools-BETA/14773129. The MST Beta release is also available in-world at the MetaHarper building in Miramare, next to the stable MST tools release.

You see what’s new in the beta release in the combined release history page: /metaharper-show-tools/release-notes/. New Beta features will be listed in blue. 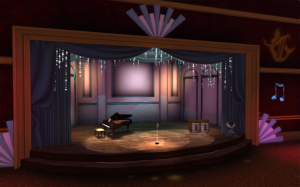 Ever since Gabba Loon installed our community theater in the historic virtual city of Nova Albion, we have entertained the idea that the theater is a public resource that anyone can book, ideally without any lead time.

It turns out that booking a performance venue in Second Life is often more work than one would expect. Typically the performer needs to be added to a land group so that performer can set up their music stream. They may also need to change textures or rez items in world to support their show. Then, after the show, this often has to be undone. It’s a hands-on progress that doesn’t lend itself well to spontaneous use.

We were talking about how we could encourage spontaneous public use of the theater and I thought we could automate many of the above tasks using LSL scripts. Last weekend I’d added smarts to our Miramare theater to do just this. Now, when anyone walks onto the stage, if the stage isn’t already being used, the would-be performer is asked if they would like to set the music stream. They can also optionally have a top hat for tips put out which forwards tips to their account with prominent notifications. Finally, a poster in the background of the stage can optionally change to display the performer’s profile picture.

The music stream, the tip hat, and the theater backdrop poster are reset when the performer leaves the stage after a grace period, and the stage becomes free for the next person to use. We hope that this will encourage more spontaneous use by DJs, or anyone who wants a quick venue to hold an event at any time.

Over the past years I’ve often thought about posting a “best practices” guide for writing group notices in SL, but didn’t have a good place to put one. Now that we have a wiki there’s a space for it! I thought I could outline some thoughts here, and then move them to a wiki later when they are more organized.

If your notice references an event, include the calendar date, and SLT hour in the title.

Second Life’s group notice delivery mechanism can be very fickle. Sometimes you might receive, or be aware of a notice until some time has passed since it was originally sent. For this reason it’s important to figure out if that interesting event already happened yesterday, the day before, or is happening right now. Help your readers find out if the events applies to them right now.

If you include a notecard, summarize it as much as possible in the group notice text.

A lot of people receive group notices from Second Life forwarded to their email. When you get an email-forwarded group notice, it only shows you the text description of the group notice, it does NOT show any attached notecards. So if you don’t summarize your group notice properly it will be received like this:

This is a waste of everyone’s time. Don’t do this to your group members! Always summarize your notecards into the group notice description, so email forwards will be useful.

Some people (you know who they are!) will copy the same notice verbatim without changes to a number of different groups. This can be a little rude. Always explain why the notice is important to the people specifically from that group. Recognize that the uniqueness of the group you’re posting in.

Archive your notices outside of SL, and put the link in your group description.

SL will delete your group notices after 15-30 days. If you want to keep a better record of them (and you should!) also post them to some other external account, such as twitter, blogger, facebook, your own website, and make sure that the people in your group know where to find this info. People trying to research or keep up with what your group has been doing the past months will thank you!

Gabba Loon and Eolene Uralia have combined efforts to create a stunningly awesome theater in our Harpers Sim. The theater can be found on the 2000 platform behind the Harper’s Hotel, and features a rich art-deco style with baked shadows and lavish decorations. So far the plan will be to use the theater for custom events as our members suggest. If you have an event you want to try, feel free to book our theater!

Yesterday, our first event was organized by our own RoadHarper Elura Galicia to celebrate our 300th member! We hosted an installment of “The Originals”- a brainchild of Pol Arida that features 30-minute live musical performances from SL musicians who create all original material. Since Pol Arida is my favourite wordsmith in SL, and Phemie Alcott (also on the ticket) is the first performer I discovered inside SL, I already knew the show was going to be memorable. The turnout was very good, especially for a brand new location at an irregular time. Towards the end the MadPea crew even came over to find out what all the fuss was about. To wrap up the evening Candace Kuhn made an enormous cake in the shape of a MetaHarp, and then (of course) jumped out of it in Go-Daddy(tm) fashion to the accompaniment of fireworks and fanfare. It’s a good time to be harper! You can see the cake and pictures from the show at our headquarters in the Harpers region.